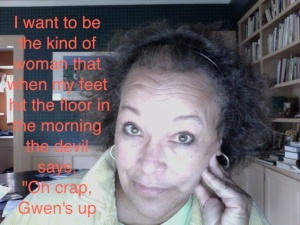 So again, I find myself up against human nature – true, racism at this level of engagement is one that appeals to baser instincts but, it’s part of our human collective none-the-less. What to make of the words, “…if Obama doesn’t make it to the White House due to a bullet to his head, it won’t bother me…” I heard these words not even an hour after parsing the enormous implications of the accusation of racism with my journalism class. And for all my verbal acuity, all I could think to call her was, a racist. I am silenced by how quickly that term came to my tongue. Had I not just implored my students to seriously consider such an accusation? But, in the time-honored tradition of likeable racists everywhere, this woman opened her mouth and removed all my doubt, saying,  “I’m not racist because I have good friends who are colored.”

“Just what color are they?” I asked. The woman was serious – in 2012 in a western New York town that boasts a Fortune 500 company. Sitting in an office of the local community college, this encounter forced me to look at the general work pool on campus – which holds not one African-American aide or secretary. Would this woman have said the same thing to, say, a more obvious person of color rather than to me – a very light-skinned (“be careful what you say around her”), African-American adjunct? This woman obviously feels very comfortable in her position here at the college and not one of her peers seems able to compel her to keep her offensiveness to herself.

I awoke from a fitful sleep dreading what was waiting for me at my office. My foreboding increased as I got closer to the campus. The panic and fear returned from a 1997 event when high school students surrounded my classroom door all wrapped in the confederate flag. As the only African-American teacher in that school, I got but a glimpse of the fear and trepidation that the marchers of the ’60s must have felt going up against the institutionalized racism of the times. That day, I wanted so badly to turn and run after seeing two of my students as part of the intimidating group and, shockingly, the son of a teaching colleague. I stood my ground because I was not going to be intimidated by ignorance and because my knees were too weak to support me to my car. For months afterwards I became the target of these sons of ‘good-old-boys’ and the victim of weak-willed administrators too afraid to call ignorance into the light and destroy it for all to see. Needless to say, a teachable moment was lost here. What was not lost, I came to understand this morning, was the low-level panic and fear for my personal safety.

The issue here is someone’s right to be brazenly insensitive – bordering racist in the workplace. The remarks this person made created, for me, a hostile environment if but for the minute it took me to grab my keys and briefcase and leave. As I write this I am not sure if I want to file a formal harassment complaint. If I did file, I feel I would be bound to some abstract justice that requires secrecy in which statements and verifications can be made, after which all would go into a separate file and life would go on.

What do I want to happen? I’ve lived long enough to know I cannot change what is in someone’s heart. As an educator of color, I see the need to meet my students with honesty and respect in modeling just how to behave in the wider world. Most of my students will leave the comfort and confines of this small community to live and work with many other groups (if they are lucky). Campus issues around racist remarks can serve as the proverbial teachable moments. I believe when these issues are identified, handled, and attempts at resolution are made in transparency, students can learn the extremely important lesson – made even more meaningful for those with whom they will work. That lesson? Respectful consideration.

I can give the good to God

But where to give the bad?

I walk among men and know

Not elsewhere to be had

man is made in his image

Which no woman understands

this God by proxy

Was not the original intent

Jesus did have a wife

From whom he sought his peace

And the age-old truth was lost;

And fire fighters fit to be

If nurses have their test decree

And doctors have their boards

A dissertation for a PhD

Permits all to help the hordes

Why, in position to vote at all,

Do we allow our fate to rest

With those of no mental wherewithal

To pass a simple test

The lower house which originates

Our laws by which we live

Would struggle it seems to regurgitate

Simple history in a test we’d give

There is a simple message here

That would lay most enmity to rest

We require them to pass a test!

When misdeeds have been packed away

In a dim and dusty corner

The attic of memory

Will I stop straining to hear

As your car in the valley draws near

And Joy will be un-ironic

As the tone and ode will sing:

Everything is all right

Everything is all right