Housed at a different location from the actual museum, the Library of the British Museum 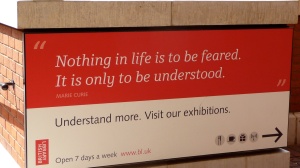 or the British Library is a place where my critical heart and whining demeanor have no place. I am arrested upon entry by the sign bearing a quote by Marie Curie claiming that nothing is to be feared, only understood. Can “understanding” really be the cure for all that ails we who have inherited a nature that defies free will? Will understanding take us to the hearts of the evil and allow us to twist, adjust a cog here a fly-wheel there correcting misspent intellect? Oh, if that were the case…

I stood in the doorway of the room that held literary artifacts of great antiquity admitting that, when it comes to literature, the British still maintain the empire. I was consumed with the knowledge that I was in a place that housed Shakespeare’s sonnets right next to those of the Beatles! Not being a true lineal thinker I stopped at the closest display that contained the fewest people – forgoing the first position Canterbury Tales & Gilgamesh until the crowd dissipated. I was given space and time to contemplate the original manuscript of Oscar Wilde’s “Ballad of Reading Gaol”. Written as he was serving a two-year prison sentence of hard labor for gross indecency – the wages of homosexuality in  Victorian Era England. The poem is a multi-page narrative of the days leading up the execution of a man who murdered his wife for her unfaithfulness; it begins with Wilde’s simple observation of his fellow prisoner’s seemingly casual observance of his last days of life – the sun, sky, a walk in step with the sound of the building of the gallows that will put an end to him. The poem turns from benign observation to internal personalization of the dead man walking. Every prisoner holds in common an execution; symbolic or otherwise because, …each man kills the thing he loves.

For Wilde, the world was a place of suffering and yet he did not relent when his own Feared and misunderstood, Wilde died November 30, 1900 exiled in his dingy Paris hotel room, without his health and without money. But his rapier wit and humor were in abundance.  My wallpaper and I are fighting a duel to the death. One of us has got to go. The wallpaper won even as the world was left without the brilliance of Oscar Wilde.

Thank you readers for bearing with me in my re-telling of a tale that can’t be buried.